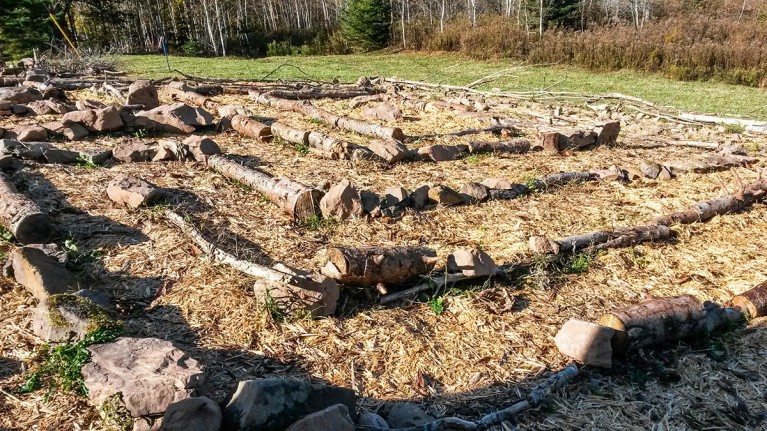 My studio practise tends to slide during “outdoor season”.  This year I have built several features on my property: a fire pit, garden wall, steps’n’stairs, paths, and, a labyrinth.  In a previous post, I discuss and an earlier labyrinthian stage.  I like Environmental art.

The stones of the earth and the bones of the forest plus a truck-load of mulch have been my materials.  A wheelbarrow full of mulch laid three inches thick spreads 3-4 feet.  My labyrinth path is about 24” wide, and while not large at about 150 steps from entrance to centre, it has taken many wheelbarrows to fill it.

Behind my house are the remains of two stone foundations: an old well and old house.  How well those stones had been positioned!  I have been carefully removing that stone as needed from June to October to work on these projects.  This also involved cutting through and removing a dense thorny bramble patch, an old rotten couch, and several tree falls all which needed to be cut apart.

Building the labyrinth has been a continuous process.  Next season, I will resume stone gathering to replace the easier-to-gather logs which are now in position.  I will add some vertical features.  But for now, the weathered logs and fallen tree limbs that currently line the paths have elements of interest, and the clover seed has rooted and sprouted.  Looking not-too-bad.  Finished for the season.